The Digitalisation of train signalling systems is set to revolutionise rail networks as we know it. With Network Rail investing over £45m on the East Coast Main Line, there is much to be excited about with this new signalling method. We were lucky enough to sit down with Paul Boyle, Head of ERTMS at LNER who outlines the importance of ETCS signalling controls and what the future holds for the UK’s digital rail networks.

What are the major challenges of launching ETCS in the UK?

Paul    The challenges include developing the business cases to support funding, designing and installing the technology, but the major challenge is mainly around people and developing the belief and understanding of how the system will be a game changer in how we operate trains in the UK. It all starts with developing the skills and knowledge in UK rail into how the system can be used and delivering the training in how it needs to be used. The level of signalling renewal that is now required in the UK now presents us with a once in a generation opportunity to make a step change in the signalling system.

“Everything from the way we access to build and maintain the railway to the way that we plan, signal and drive our trains will change”

How exactly can ECTS improve capacity and deliver more trains to time on a large scale?

Paul        The key principle of how this can be achieved is that ETCS provides the ability for the train to communicate to the driver updates movement and speed information consistently and at variable locations. This real time update of movement information that is not reliant on fixed locations (ie signals) to the driver means that you have a more dynamic railway with less “stop-start”. A real game changer with ETCS is the ability to reduce the impact or remove entirely the everyday performance events that cause 1-2 minute delays such as restrictive signals (catching a train up ahead) or emergency speed restrictions. The system also removes restrictive signalling and train planning rules that allows “to the second” scheduling.

Sometimes we talk about the ERTMS and sometimes the ETCS. Are they one and the same?

Paul      A ETCS (European Train Control & Command System) is the “in cab” signalling control and Automatic Train Protection fitted to both the infrastructure and the on board train system, this is the backbone component of the command and control system that makes up ERTMS (European Rail Traffic Management System). Basically, ERTMS contains 4 components, ETCS, GSM-R, European Operating Rules and Traffic Management System.

What benefits will the ERTMS bring to passengers?

Paul        The introduction of ERTMS will bring a step change in how we operate and run the railway, everything from the way we access to build and maintain the railway to the way that we plan, signal and drive our trains will change. Customers will see this translated into improvements in performance, less intrusive access and the ability to recover situations when things go wrong.

Are drivers prepared for ERTMS? How much of their training can be done using simulation?

Paul       We have been preparing our drivers for ETCS over several years, providing communication, familiarisation and building awareness, early engagement with our trade union representatives has been key to this. The training requirements are currently under development through cross industry strategy groups covering both passenger and freight operators, the key principles for me with this development is putting the end users at the heart of the design and business change, simulation will be a key training tool as part of a blended learning strategy.

Where is the ERTMS currently in use?

Paul        ERTMS is in use worldwide in with thousands of km’s of infrastructure and trains fitted, the routes fitted are a mixture of new lines (including high speed) and many mixed traffic railways similar tot he ECML in the UK such as Switzerland, Austria and Spain. 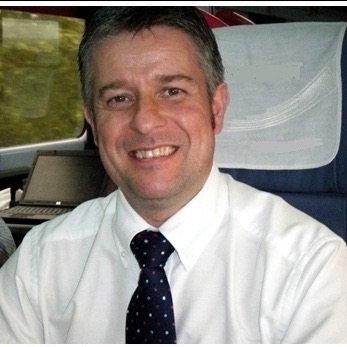 Paul Boyle is LNER’s Head of ERTMS and has worked in train driving, control, safety and strategic operations for the ECML train operating companies for over 35 years. I have been involved in the industry’s transition to ERTMS since 2004, working as part of industry working groups and forums.

Since early 2012, as the ERTMS programme for GB started to mobilise towards design and delivery on the ECML, I was appointed as Project Manager for ERTMS, leading our engagement and input the Digital Railway Programmes.

I am responsible for preparing LNER for the future changes that ERTMS and our new Azuma trains will bring, developing our business knowledge and providing input into the many energy work-streams: such as, the strategic design of routes and the future Digital Railway enhancement schemes for the ECML, developing of the operating principles for Class 800/801 Azuma trains ETCS train fitment, operational rules and procedures, as well as the training and awareness for all affected staff.

Paul will join a panel discussion on implementing a digital railway at Accelerate: Rail Infrastructure, which will take place on 10 October 2019 at Le Méridien Piccadilly, London.

Accelerate: Rail Infrastructure 2019 is the UK’s leading conference that brings together senior decision-makers delivering major rail projects in the UK and beyond.

Stay in the accelerate loop.